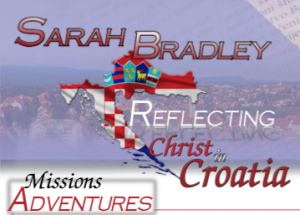 That doesn’t seem to add up! Yet here I am in Croatia with a French language dilemma. God blessed me with a remarkable opportunity to minister to an 8-year-old young man from the Republic of the Congo. His name is Toni. God brought Toni and his family to Croatia at the beginning of this year. Much prayer and paperwork, as well as yards and yards of bureaucratic red tape went into getting this family to Croatia. Their goal was to be reunited with their husband and father François. François had been in Croatia for some time and was a member of New Life Baptist Church here in Zagreb. However, François went to be with the Lord last fall due to complications from COVID. Despite the unforeseen circumstance, François’ family still made it to Croatia.One Sunday, about a month after my arrival in Croatia, I had 2 students in my Sunday morning Bible class. Once I wrapped up the Bible Lesson, we started playing a game. The game went a little longer than the adult services and became a little competitive and loud towards the end. Toni wandered to the back room to see what all the commotion was about. It was then that the Holy Spirit convicted my heart. I had not originally included Toni in the class because I don’t speak French and there was no one who would be able to translate my lesson. (We have a man who translates the adult services into French for the older members of François’ family.)

I went home that Sunday with a heavy heart. How could I include Toni in class when he does not speak any English or Croatian? I began to pray that God would show me a way to include Toni. At first, I thought I could write out the lesson and have it translated into French; then Toni could read the lesson along with us as I teach. There was a slight problem with that plan, however, because I learned that Toni does not read. So back to the think tank I went, to discover a way to include Toni in class. As I prayed and asked God to show me what to do, I discovered that Microsoft Word does a pretty accurate job of translating Word documents into French. I also discovered that Microsoft Word does a decent job of reading the document back to you. This means I can write the lesson in English and translate it to French. Then for added accuracy, Innocent (our French translator) checks the lesson for errors. Finally, on Sunday, my iPad reads it in French to Toni. It’s a whole process, but I praise the Lord that He made a way so Toni could be included. I think he is enjoying the opportunity to be involved.

I praise God for Toni. There have been many Sundays over the last month that he has been my only student. I was a little discouraged with this at first because my heart longs to reach the Croatian Children. But again, the Holy Spirit smote my heart and helped me with some perspective. Since I began to include Toni in class, there has only been one Sunday where Croatian children, who don’t speak English have joined us. Let me just say, with the variety of languages, class was interesting. The iPad read Toni’s lesson in French, I taught the lesson in English, and my Croatian translator translated into Croatian. I pray that God will use the lesson to speak to the hearts of these Children despite, my linguistic inadequacies and shortcomings.

God’s timing is perfect. I would love nothing more than to have dozens of kids in class, but the Holy Spirit reminds me that He has given me Toni for this season. We don’t know how long his family will remain in Croatia since François is no longer with us. In fact, the original plan was for them to head to the United Kingdom in May to join some other family members. But God, in his perfect timing, still has them here in Croatia with us. For such a time as this, God has given me Toni. I don’t know if Toni has accepted Christ as his Saviour; but I pray that Christ would become real to Toni and that God would use me to minister to Toni for however long He will allow him to remain here in Croatia.

Musings of a Single Lady In Missions

Praise God for Charissa! She is an intern we have with us for a year. I have enjoyed getting to know her and her friendship and companionship have helped me in tremendous ways as I am adjusting to life in Croatia. It has been a blessing to have an outreach partner. She and I distribute Gospel tracts and flyers together on Tuesdays and Thursdays. In the month of August, we were able to distribute flyers around the entire district of Dugave (Doo-guh-vae). Please pray for the people who received the flyers. Pray that the Gospel on the flyers will change many hearts and lives.

I typically get Animal crackers to go with our Noah’s Ark lesson. However, I was unable to find such a snack in the 4 different stores I visited.

It was time to get creative! I decided to make cutout cookies. I knew I would need flour, so while I was at the store I grabbed a package of what I thought was flour. The packaging read heljedino Brašno (heal-yed-ino bra-sh-no). I knew the word for flour was Brašno so I just grabbed the package and headed to the checkout. Needless to say, I learned the hard way that heljedino is the Croatian word for buckwheat. Let me just tell you, buckwheat sugar cookies do NOT taste good! After another run to the store for All-purpose white flour and more butter, the cookies finally came together.